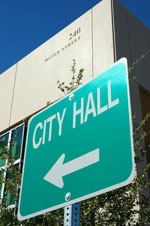 The City of Henderson employs 1,901 full-time and 965 part-time employees (January 2016), and is the largest full-service city in Nevada directly providing to residents and businesses all the essential public services: ambulance, fire, police, water and sewer.

The City’s General Fund operating budget for FY2016 is $231.6 million. More than 55% of the General Fund expenditures are allocated to Public Safety (Police, Fire, and Building & Fire Safety). Of the General Fund revenues approximately 42% is derived from Consolidated Tax (mostly Sales Tax) and another 25% comes from Property Taxes. The City of Henderson maintains one of the lowest property tax rates in the valley and one of the lowest employee-to-citizen ratios.

In 1999, Henderson was the first city in Southern Nevada to provide municipal services away from City Hall, providing residents the opportunity to transact business with the city online.

Henderson was also the first city to stagger city employee work shifts so that public offices could be accessible 10 hours a day, four days a week. Residents can pay water and sewers bills, or do other business with the city, on their way to work or on the way home in the evening. At the same time, the city's four-day work week, with employees working 9.5-hour days, saves the city approximately $5.70 million each year. With City Hall closed on Fridays, it saves an estimated $1.4 million each year.

Because Henderson is a full-service city, residents are not required to deal with myriad of agencies for municipal services. This results in elected officials, city management, and staff being directly responsible for the delivery of quality of public services and customer satisfaction.