Enjoy the great outdoors! The City of Henderson's extensive 220+ mile trail system provides an opportunity for recreation and serves as a mode of alternate transportation. Our Outdoor Recreation section also offers a variety of organized walks, hikes, rides, and educational activities that will enrich your life and put you in touch with nature.

Learn about the Nevada Children's Outdoor Bill of Rights at nvoutdoorkids.org.

While enjoying our trails and bike lanes, please keep the following in mind:

Henderson Trail Watch volunteers promote safety and appropriate trail use by providing information and assistance to all trail users, by observing and documenting safety issues requiring attention and by serving as a positive presence on Henderson trails.

The goal of Hiking Henderson is to encourage you to get outdoors, see the sights and get healthy all at the same time. Hike eight trails in the spring or fall to earn a hiking staff. 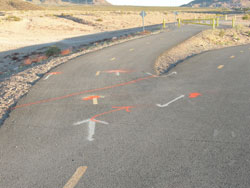 So is spray painting directional markings on City of Henderson trails and surrounding landscaping. It's unsightly and it's against the law. We recommend using duct tape instead. Please help us keep Henderson trails beautiful. Report vandalism to the Police Department's non-emergency line at 311.

On February 19, 2013, the city of Henderson’s highest point was officially designated at 3,540 feet above sea level. To mark the high point, a survey monument was placed by City of Henderson staff and members of the Highpointers Club, a national organization that promotes the preservation and conservation of high points and provides a forum for education.

Henderson’s high point is located in the Black Mountain Regional Preserve, adjacent to Sloan Canyon National Conservation Area. The area is characterized by steep, rugged terrain and is not accessible by a city-maintained trail. For your safety, all visitors are strongly advised to stay on city-marked trails only.